The source of all evil in this universe springs forth from the undullating womb of the Afghanamerican-Nick-Cage-Obamacare Triangle of Conspiracy. It is respnsible for hiding the secrets of meta-tempral phsical-time and the multiverse of parabolic-linear recursion geometry and the TimePyramid from the citizens of the human race. It infiltrates all aspects of eggsistence and life in all it's facets of existence and life and the Illuminati. The goverment of these United States of America is a major benefactor of the triad and forms one of the three verticies of the Conspiracy Triad. A Conspiracy Triad being a multi-dimensional organisation and or collection of seemingly unrelated disparate things that concern themselves with and promote conspiracy.

The reality of The Situation of reality is that these United States of American are in kahootz with the Al-Quada of Afghanistan and other related places that are situated in the middle of the east of the world, in relation to the Universal Senter. The so called "War on Terror" is a ploy generated by the cooperation of these two parties, in an attempt to distract us from the Inherent Truths of the Universe and other things. George Walter-Octavius Bush the Second jr. II (hereby know as GWOB 2) is the ringleader and master of his domain (wherein his domain concerns Afghanamerica) and also the person who is in charge of all decisions regarding this subject. The Afghanamerican conspiracy has been concocted to keep us and our tax-payer dollars firmly in the hands of the goverment and allowing them to sustain deals regarding oil and gas imports from Afghanistan and other places on this planet. 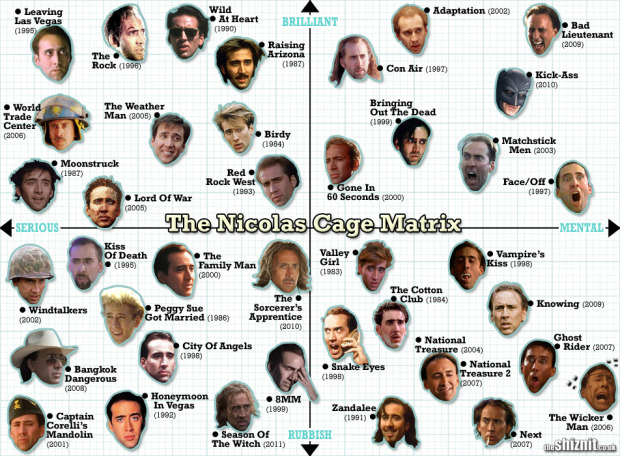 Nick Cage has been sent from an alternate universe to infiltrate the core fibre of the internet through the method of memetics, worming his fleshy white fingers into our minds and collective consciousness in order to gain control of humanity. The Nick Cage Phenomnomnom has already worked it's way into 58.253% of the zeitgeist, with each movie, picture and gif spread online enlargerning his reach and deepening his penetration into ourselves. Each new Nick Cage meme mutates his cultural fibre, making him grow stronger and more powerful. By taking control of the internet in such fashion, Nick Cage will soon assume control of all of us, we will never be able to escape his grasp, we will be forced to follow his every whim, and eventualy some kind of connection not disimular to a mind-meld (Or facial transposition, as demonstrated in Face Off) will be established, allowing him to enter our minds and initiate a hivehind complex. It is for this mystical power the he posess that he is in pardership with the Afghanamerican Conspiracy, allowing them unparaleed infiltration into the heads of their voters and slave-citizens. Anybody who doubts this theory has obviosly been brainwashed by Nick Cage and Co. into believing in their lies and making them all Educated-Stupid Blind Evil Bigots.

Everything that is wrong with anything can all be traced back to Obamacare. Obamacare is the source of all evil in this universe (and possibly in many others in alternate form such as Romneycare or Palincare) and there is no stoping it's perverted perversions and evil evilness. Obamacare is a web of lies of a web of illusions wrapped in a riddle that is enclosed in a mystery that contains an enigma, the extent of it's full scope is beyond the limitations of this website, to explain it would require me to type page after page of seemingly random words and gibberish dog boat rectangle bobbidlleboop womp placemat and that is lacking in point. Instead, let me tell you what Obamacare is responsible for. Obamacare is why we are in debt. It's why the goverment was shut down. it's why there is a climate change conspiracy. It's why you can't slap your wife with your gun that you bought at a marajuana store while you shout 'racist insults' at people of colour. It's why mean kid beat you up when you were 10 and called you a fat nerd and told everyone not to play with you at lunchtime because you smelt like cheese-and-bacon balls, then he told everyone to call you Cheetoes for that reason. It's why you hide your feelings with food. It's why you can't find a girlfriend. It's why your boss harasses you infront of your co-workers. It's why you can't have that car you want or that nice mansion or be rich. It's why you still live with your mother. It's why no matter what you did you were never able to please your father. It's why the priest did those things to you that you try hard to forget. It's why you want to die every single waking moment of the day, and why you write this website as a way of externalisng your dissatisfaction and existential misery, placing the blame on everything but yourself.

Each vertex of the Afghanamerican-Nick-Cage-Obamacare Triangle of Conspiracy comes together in order to form the Afghanamerican-Nick-Cage-Obamacare Triangle of Conspiracy. each part works together to hide the secrets of the universe from us and our minds, making us educated stupid and blind to truth of lies.